There is nothing, absolutely nothing like the sprint finish of a bike race.

For a start, in a big stage race, you never know if there will be a sprint finish.  On a flat stage, there usually is but sometimes a couple of riders will break away so fast that even the combined strength of the peloton can’t reel them back in (cycling cliché alert). Occasionally, a lone rider will jump away from the rest and time-trial his way to a solo victory.  Mostly there are sprint finishes.

There’s a lot of jostling in the last 3k as teams get organised to lead out their most explosive sprinters.  You can always pick out the sprinters. While the climbers are skinny and slight, sprinters have the bulky power-packed thighs of Bernini’s river gods.

Last Saturday, I was in Cheltenham, 100 metres ahead of the finish line of the 7th stage of the Tour of Britain, watching on a big screen as the riders braved 185k in driving rain, sunshine and howling winds before dropping down Cleeve Hill and heading into the centre.

The helicopter shots were incredible. The riders were all together – a morphing mass of colour like a rampaging living creature, swooping around the sharp right near M&S, then swooping immediately left at Boots corner and surging between the crowds on the Promenade.

One minute they were on the screen, the next, the riders came into view – three just ahead of the rest, a gap and then scores of others. We were all roaring encouragement, spectators banged on the boards of the barriers as the announcer, over the din of the crowd, managed to announce who had won – Dylan Groenewegen of LottoNL-Jumbo.

The crowd were running on adrenaline themselves now, enthusiastically cheering every single straggler… some of them putting on a sporting burst of speed even though they were at least 30 riders down.  The last few riders, cruising in having had a crushingly difficult day, got the biggest cheers and applause of all.

That’s what happens when the crowd is up for it. Infectious fantastic enthusiasm.

I fired off a load of shots on my Canon camera on Sports setting as they came through. It was only later, downloading the images to my laptop that the world of sprinters was revealed; rictus grimaces, contorted faces of pure animal aggression, poker faces of steely determination, tensed muscles shiny with rain and sweat and road dirt.

My successful racing cyclist brother used to refer to the visceral “red mist” of the sprint. My pics are amateur shots;  the focus is a bit off, the light wasn’t good but that red mist …. I fancy I can almost see it… 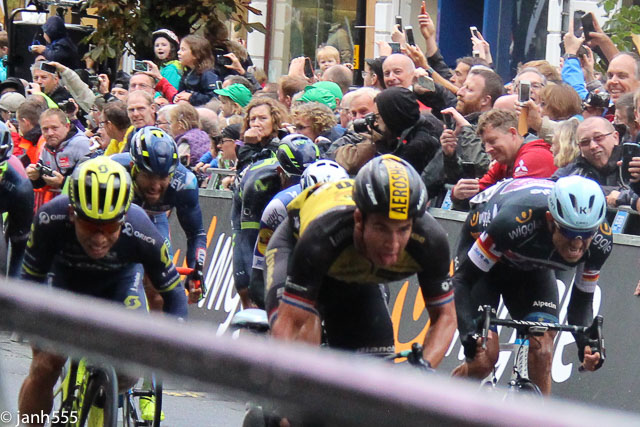 Dylan Groenewegen with the yellow-striped helmet, team LottoNL-Jumbo. He won the Tour de France sprint on the Champs Elysees in July – so the Promenade blast was a piece of cake.  To his left Orica Scott sprinter Caleb Ewan, who came 2nd and on the right  Fernando Gaviria of Quickstep Floors. 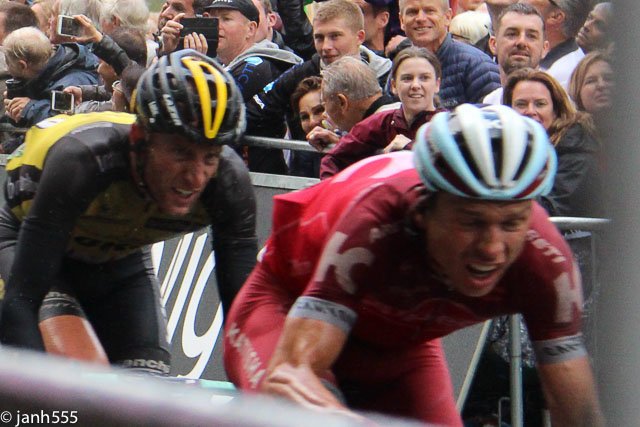 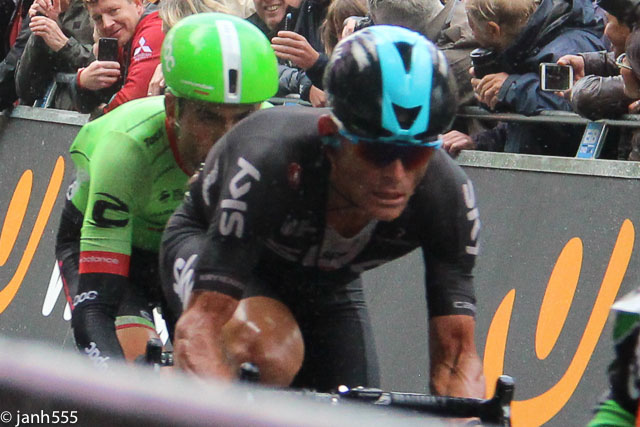 Geraint Thomas. Pride of Wales as first Welshman EVER to wear a yellow jersey in the Tour de France but later, unluckily crashed out with a broken collarbone.