No raining on my parade

Ok, stand by to be hit by the oddest thing…

But first, picture the scene; the Dara O’Briain comedy gig in the Tata Tent, the biggest venue at Hay Festival.

I was sitting about 10 rows back with a genial and huge rugby-player of a bloke to my right (when I say huge, I mean his armpit was in my eye-line) and a skinny woman with a blonde bob sitting on my left.

I’d exchanged greetings with both when I sat down so we were cool.

The guy was loving Dara, rather like me. The entire audience seemed to love him. He was going down a storm but actually nothing to compete with the thunder claps exploding overhead and what sounded like an apocalyptic rainstorm.

Dara had to shout to be heard over the ferocity of the tumult outside and said he’d never had to deliver his lines Nuremberg rally-style before.

It just got more and more hilarious as the thunder and torrential rain continued, with Dara pitching a vision of us all the only survivors as the storm washed away the rest of the festival. Everyone was in stitches.

But the blonde woman did not react. She didn’t laugh once. At anything. Not even inwardly.

I don’t think she was even laughing inside.

She got increasingly twitchy.

Watching her in my peripheral vision, a small part of me was a little concerned that she had a medical problem. She was about to have a fit, a stroke, explosive diarrhoea or projectile vomiting. I usually try to avoid people will any or all of these things.

She was a bit off-putting, to say the least – especially as she kept turning to look in my direction, but she may have been just looking at the doors. I studiously ignored her and concentrated on Dara and his foul-mouthed but hilarious and intelligent comedy.

But a still small part of my brain was thinking “Is there anything in my bag that could possibly double as a sick bag? No. Only the bag itself. Ewww.”

Then at one point in the show, she asked to write something on the notepad I had on my lap.

This was entirely unexpected. If she was about to have a fit or a stroke though, maybe this was going to be her last will and testament… or maybe she was agitated because she’d forgotten to order something from Ocado that was going to be delivered tomorrow.

I looked at her quizzically. I hardly ever let people use my pens, yet it seemed churlish to refuse this weird stranger.

In shorthand, she wrote ” This is so fucking awful.”

She handed back the notebook and pen and looked at me with a terrible desperation.

I wasn’t sure whether she meant my laughter, Dara’s jokes or what. I didn’t much care. It sounds heartless but hey I was at a comedy gig, not about to take on some stranger’s psychiatric case. I just shrugged my shoulders, turned over the page and went on taking in the comedy.

I don’t know why she didn’t just go. I have no idea why she decided to share that with me as I was just sitting there being a normal member of the audience.

It can be a downer sitting next to someone at a concert or comedy show that is just not getting it. But actually, I refuse to take on anyone else’s bad mood. They can stuff it where the sun don’t shine.

I should have written in shorthand back “Kindly do not rain on my parade, you miserable fuck.”

But obvs, I didn’t. I am laughing as I type. I don’t look the kind of woman to say that sort of thing and it might have shocked her into a fit… or even worse, further shorthand conversations!

As Dara O’Briain said at the beginning of the gig “If you’re the kind of person who laughs inwardly, then could you fuck off and stop taking the chair of someone who laughs outwardly?” 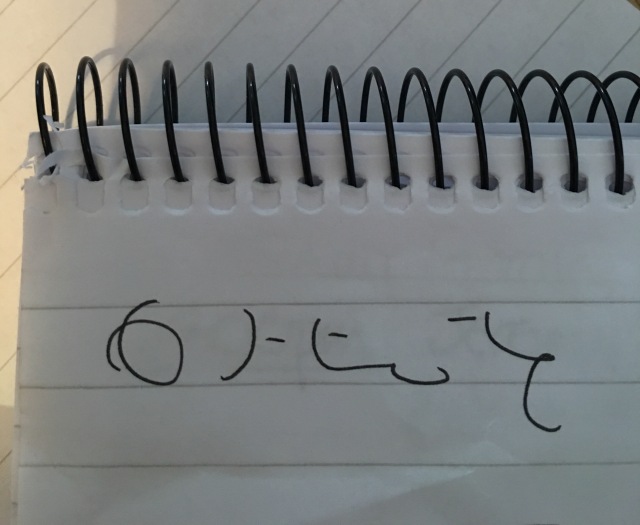 10 Responses to No raining on my parade