After a thoroughly busy challenging working week last week, it’s been a restorative relaxing weekend back in the homeland.

I never expect much of Wales in November. They don’t call it “liquid sunshine” like they do in St Lucia, it’s just Welsh rain. It’s why the grass is green and the lamb is wonderful.

We left Gloucestershire with the sun still struggling to penetrate the mist, then somewhere near Cardiff on the M4, the blue revealed itself and it remained blue. It was as though autumn was determined to go out in a blaze of glory. The sun burnished the bracken on the hillsides and lit up the last of the beech leaves and the dried pale oaks.

It was dazzling in Swansea Bay. The tide was retreating in a most refined manner;   flat calm, well-behaved and lapping gently at the freshly washed sand.

The world was out to play. Joggers, cyclist, dog-walkers, beach strollers like us.. picking up shells, playing ducks and drakes with the few flat pebbles available, patting passing friendly spaniels and thinking it must soon be time to have another dog or maybe two.

Singleton Park was hosting a fun run of some sort, so we kept crossing paths with panting Santas and florid elves.  At one point the elves must have got mixed up because they passed each other in opposite directions.

The squirrels were tamer than ever. I used to think that son #1 had tamed one especially for photographs but it was obvious today that they’ll do anything for a couple of peanuts or sunflower seeds. 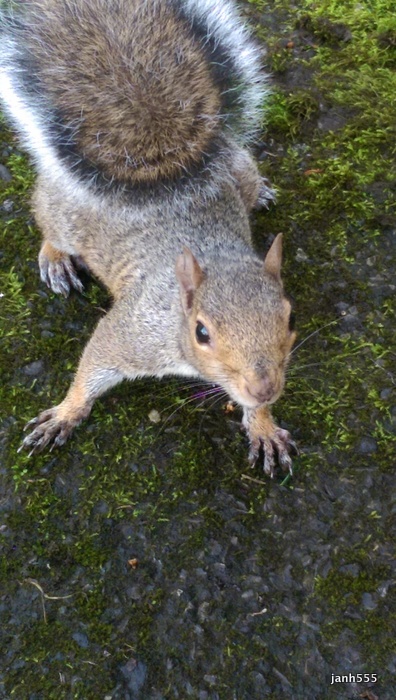 The other pleasure about staying with son #1 is that when he’s not working very hard, he’s quite musical so there’s always some new audio experience and something interesting to see and try.

This time it was a set of bongo drums then he revealed that he’d just taken delivery of his birthday present – a hawaiian guitar. While I didn’t get to play that, I did get to play yet another new instrument in the house, a beautiful traditional Chinese creation called a Gu Zheng, invented about 2,000 years ago.  It’s a sort of recumbent Chinese harp and creates that distinct sound so familiar in Chinese music. It’s possible to get a tune out of it straight away but as with all instruments, it becomes very technical to play correctly with both hands AND follow the Chinese music notation.

I was happier borrowing son’s black acoustic guitar, which I covet because its lovely tone makes the most ropey guitar player like me sound good. It’s the ultimate relaxation, sitting on the sofa picking out almost-forgotten songs on a nice guitar.

Staying with the Eastern theme, we discovered an excellent Chinese restaurant in the most unlikely location on the edge of Brynmill.  The Favourite Cafe and Restaurant serves superb fresh-cooked traditional dishes from Bejing and Xian.  The kung po chicken was just as good as the one I had in Beijing over a decade ago and the beef and mushroom noodle stew was delish.

If they ever need a Gu Zheng player to entertain the customers, I know just where to find one…

That’s Exmoor across the Bristol Channel…