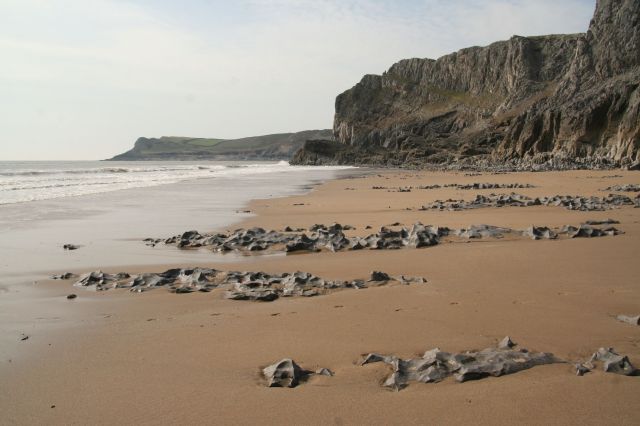 Well, it was Mothers’ Day recently so I indulged myself and rustled up some family to visit one of my favourite beaches in Wales – Mewslade on the Gower, Wales.

At low tide, it’s beautiful stretch of rufous sand with low ridges of pitted grey limestone stretching out to the sea from the cliff like bony fingers. At high tide there is no clue to the beach beneath.

After a relaxed picnic with the folks, I wandered over to the waves, rolled up my jeans and went for a paddle.  Each time the surf broke against the rocks, millions of sun-dazzled diamonds of water were thrown up.

It was an irresistible arty picture opportunity,  so I ventured further into the sea among the rocks, in search of the right angle. It wasn’t going to be easy as the sun was directly ahead but Welsh women never say Dai.

I suppose I should have given a thought to the tide racing in. We’d noticed it earlier and moved our picnic to higher ground. Swansea has the biggest tidal range in the world or maybe it’s the second biggest.  I probably need to check that.

And while I was framing that perfect picture with the Canon SLR, the withdrawing sea mischievously sucked the sand out from under my feet, seriously destabilizing my lens and me.

One hand instinctively grasped a nearby rock, the other held the camera above the briny as I helplessly sank into the water.  No gravitas – merely saturatedass.

That was the moment when the mobile tucked into my back pocket probably dislodged.

By the time I realised – after thoroughly checking the Canon and the lens, which – horrors – – had sand on it, the whole area where I’d been standing was deep and murky with swirling sand a seaweed.

I reported the loss to a guy at Vodafone who, bless ‘im, didn’t laugh and they blocked it, just in case it was washed up and still useable but I suspect that by now it’s in Davy Jones’s locker or Dai Jones’ – whoever owns the lockers thereabouts.

It’s quite weird being without my phone.

I don’t usually spend a day without it, let alone two. It’s like another limb. My whole life is in it… memos, diary, photos, conversations with people in various parts of the world, emails, games, plane-spotting app, my running app, my cycling app, my map app, twitter…a half-read book..etc etc  Don’t even get me started on music – oh I have already… well there’s my own music library and Spotify which is a cornucopia of mood-enhancing tunes, familiar and brand new.

The few days before I got my new phone, there were little lacunae where during the busy working day, I’d usually take a look at the phone for messages, pics emails that pals may have sent.  Without the phone, nothing. Not a dicky-bird. I felt catapulted back into the age of the quill pen.

I felt isolated but also released from the habit of immediate gratification.  The emails, the messages and news had to wait until I could access the home computer much, much later and most app-based stuff wasn’t received at all.

When my new spiffy Samsung S4 came, it was a big disappointment. While it’s a rather beautiful, light piece of technology, the battery didn’t even last the day and it refused to link up with the home wifi.

So I’m managing with my trusty old HTC for home use and the not-so-spiffy Samsung for out and about.  I don’t recommend two phones instead of one – twice the fuss and half the effectiveness.